The Emotional Throes of a Leave of Absence

The Spring of 2013 was one of the most challenging semesters I have experienced. It wasn’t because of a heavy course load, nor was it because I was in involved in multiple clubs and committees (a habit that I have been guilty of time and time again during my undergraduate years). The Spring of 2013 was a semester filled with a storm of anxiety and anger; it was the semester I had to take my financial leave of absence from university.

During the fall semester, I faced every student’s biggest fear: half of my financial aid was taken away. As I stared at the heart attack-inducing number on my computer screen, I could feel despair taking over me. After several weeks of debate, tantrums, and many rivers of tears, I finally made the decision to take a leave of absence to figure out a solution on how to pay back the debt that I owed my school, and find a way to pay for school moving forward. Something no one tells you is that when you’re a first generation Mexican-American these decisions aren’t just made on your own or with only you in mind; everyone is involved, even younger siblings. Maybe that’s why the after affects hit even harder.

My dad went with me to move out of my dorm. The weight of packing away my stuff in January (four months prior to the end of the academic year), made time slow down. This was supposed to be my home for a whole year, and now it was being taken away from me. I was going home before the end of my first year; I wasn’t going to finish. My dad and I packed in silence; the drive home followed the same route.

What followed were four months of intense anxiety. I had enrolled in a community college to keep myself from falling behind. The drive to and from school, my heart raced as if I had drunk three cups of coffee on an empty stomach. Each day seemed to drag on for miles and to put it simply, I was angry. Angry at myself for failing and making such a stupid mistake on my FAFSA; angry at my parents for not being able to help me with any part of the college process; angry at God for making me go through this situation; even angry for having to take classes at the community college. Every moment on campus only reminded me of the activities I wasn’t doing at LMU. I went from being involved in multiple clubs and student organizations, to being in nothing and doing nothing. It was a dark combination of that anger, fear of potentially not being able to graduate from school, and this impatient anxiety that made me feel like I was fighting against shackles to get to my dreams.

Even when the anger faded, the “failure” stayed

There were many times where I could feel myself slip into a depression. It just felt impossible to shake feeling like a failure. As the oldest, the first born in this country, the first to go college, the concept of getting the college process right the first time around wasn’t a high demand; it was an expectation. I didn’t just fail myself; I failed my parents and my brothers.

When I would visit campus to talk to financial aid, I made sure to do it at a time when I knew I wouldn’t run into anyone. I didn’t want anyone to see me unless I was a student. Unless I was a student, I didn’t belong on campus. Even when I finally made it back to school, it followed me around like shadow that I couldn’t shake off.

Every year following that experience, I was worried it would happen again. Maybe it was a type of trauma that I was facing, but every year when FAFSA would come around, I would feel a constricting in my chest; nerves kicking in when I would have to fill out the form online.

It took discussion and reflection for me to realize I wasn’t able to forgive myself. This feeling of failure was strong enough for me to doubt all of my abilities, even after I made it back. It took a couple years for me to realize I needed to forgive myself. I made a mistake, it didn’t mean that I was a failure for not understanding FAFSA or financial aid; to understand hidden curriculum, sometimes you need guidance—a guidance I didn’t have. What matters is that I made it back. I finished. I graduated. And the struggle made it all the sweeter.

Have you faced challenging times while in school? How did you make it through? Let us know below! 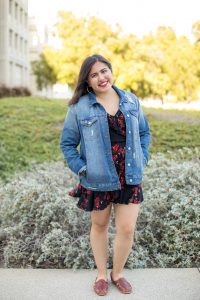 Overwhelmed? 5 Tips To Keeping Your Sanity

Hello there multitasking super-achieving college students! I congratulate you on..