Ariana Allen
Have you ever felt like you didn’t belong? Or that your accomplishments, like getting into college, that job or promotion, weren’t deserved? Do you feel paranoid that someone will uncover you are a fraud? If you said yes to one or all of these questions, you may be suffering from Imposter Syndrome.
You probably feel like you are the only one but I’m here to tell you that you are not alone. Imposter Syndrome is more common than anyone lets on; something like 70% of people “will experience at least one episode” of Imposter Syndrome in their lives, and it’s been found in a wide variety of professional and academic settings. according to a paper by Jaruwan Sakulku and James Alexander called the Imposter Phenomenon.
So what exactly is Imposter Syndrome and what can be done to defeat it?
What is the Imposter Syndrome?
The term, Imposter Syndrome, was coined in 1978 by clinical psychologists Dr. Pauline Clance and Suzanne Imes, and initially, it referred to high-achieving who were unable to internalize their accomplishments and success despite outside praise, positive feedback, acknowledgments. These women often dismissed their success as luck, good timing, or success in deceiving others into thinking they were smarter than they believed themselves to be.
According to a report in the International Journal Behavioral, people who suffer from Imposter Syndrome “experience intense feelings that their achievements are underserved and that they’re likely to be exposed as a fraud,” according to a report in the International Journal of Behavioral Science.
Harvey (1981) asserted that anyone can view themselves as an impostor if they fail to internalize their success and this experience is not limited to people who are highly successful.

How can you tell you have it?

There is a short quiz by the NYmag where you can test your level of Imposter Syndrome which you can take here.
I heard of Imposter Syndrome some years ago and a light bulb went off for me. Yes! That was exactly what I had been experiencing. I could feel it creep up from time to time, particularly when it comes to Educated Latina. Being an entrepreneur is a journey; one that is filled with doubt and uncertainty. There are days when I think to myself, “Who do you think you are?” However, I’ve been intentional about building support systems in place when I feel Imposter Syndrome creeping in.

How can you defeat it?

This syndrome is real and it does exist, but you don’t have to let it rule your life or your decision.
Remember your Accomplishments
Your journey to college and within academia may not have been easy like others, but that doesn’t make it less deserved. If anything, your ganas to push yourself to reach for something, in many cases to be the first in your family to go is bold. You are a trailblazer.
Reflect on your accomplishments and write them down in a journal. Whenever you are feeling like a “fraud” pull out this notebook and remind yourself of the amazing things you have done.
In addition to having my tribe of family and friends for support and encouragement, I created a binder. This is my “Ariana” binder and in it, I have motivational quotes, my best writing pieces, warm fuzzies from classmates at LMU  written at a retreat and former co-workers from a team-building exercise, and a sketch of me drawn by a mysterious artist on a NY city subway. I turn to these when I need encouragement and reminding of my purpose.
Don’t listen to the Naysayers
There will be people who question how you got into a university, why you are in their school. Those questions have more to say about them than it does you. Remember, universities weren’t people for people like us in mind. Stereotypes and microaggressions will be something you deal with but that has nothing to do with your abilities, goals, and dreams. Don’t let them get you down because they win.
Don’t Compare Yourself to Others
I personally battle with this all the time and social media doesn’t help, but just like our friend in the video recommends, comparing yourself to others is the worst thing you can do. Everyone is fighting their own unseen battles.
What helps me is knowing that I am not alone in feeling this way. Even some of the most powerful, influential people suffer from Imposter Syndrome, like one of my heroes, Supreme Court Justice, Sonia Sotomayor.
In a visit to Pomona College, she reveals that she also suffered from Imposter Syndrome throughout her days at Yale and in her career.

“At Bridges, Hollis-Brusky asked Sotomayor about the “imposter syndrome” that some first-generation students feel when they come to college—feeling that they don’t belong, that they were admitted by mistake or that gaps in their knowledge may be revealed. In her book, Sotomayor described having that feeling during her time at Princeton and Yale Law School and throughout her career. Hollis-Brusky asked if Sotomayor still felt this way as a Supreme Court justice and what advice she’d give to students who were experiencing this.

“It got worse when I joined the court,” Sotomayor deadpanned, citing her colleagues’ intelligence and broad knowledge, ranging from the Constitution to Ruth Bader Ginsburg’s passion for opera.

“It is very, very difficult coming from a background like mine, seeing how writers talk about how different you are from the others, not to feel a bit intimidated, not to feel some of the imposter syndrome. I try to explain what I do in my book, and that is, I acknowledge what I’m feeling because I think the first step in changing anything is being truthful about it. And being truthful enough to say, ‘No, I may not be cultured in the same way. I may never be Ruth Bader Ginsburg and have her total recall of opera, but I do my own thing, and it has value, too.’ … If you’re comparing yourself to others you’re often going to find yourself short on something, especially if they have a background different from your own. But you’re there for a reason—you’re there to do something that’s unique to you,” she said.

Have you ever suffered from Imposter Syndrome? What did you do to overcome it? 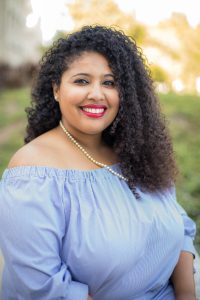 Thank you for writing about this issue! I’ve suffered from imposter syndrome in waves during my time as an undergrad so far and it’s been hitting me hard recently while trying to tackle my BA Thesis. Still working on trying to overcome it but definitely going to try writing down accomplishments as one way to help.

My pleasure! I don’t know about you, but it’s definitely a relief to know that I am not alone in this issue. I hope that is comforting for you too. I’m 100% sure you have accomplished amazing things so writing them should be a breeze. If not, find someone that can remind you 🙂

Thank you for reading the article and sharing your story. Good luck with your thesis!